What is the Justus Lipsius Award?

After the closure of the XIVth IAMAM (now ICOMAM) Congress in 1996, the Dutch and Belgian organizers were fortunate enough to find themselves with a positive balance to their operating budget. They decided to devote this extra money to allocate a triennial award to authors of recent and outstanding published or unpublished researches in the field of arms and armour studies. This award was named « Justus Lipsius », after the famous humanist and antiquarian active in the then Low Countries during the 16th century.

The prize money consisted of a sum of 2,000 Euros, ultimately raised to 2,500 Euros. It was first attributed in 2002 and it will be granted in a moment for the 6th and  also last time since the initial funding is henceforth used up. All in all, 11 scholars will have benefited from the JLA Award, either individually or in joint publications. Lately, the Jury had decided to restrict the grant to participants under the age of 45 in order to encourage younger scholars.

Ever since the inception of the JLA Award, the Jury was and is composed of:

– Dr Claude GAIER, director of the Arms Museum, Liège (Belgium), former president of the IAMAM, as chairman of the Jury from the beginning until now

– Mrs Ilse BOGAERT, curator and head of the Textile and ArtDepartment of the Royal Museum of the Army and Military History, Brussels, current secretary of the Jury

– The late Piet DE GRYSE, former chief curator and acting director of the Royal Museum of the Army and Military History, Brussels, as treasurer of the Jury.

Who was Justus Lipsius? 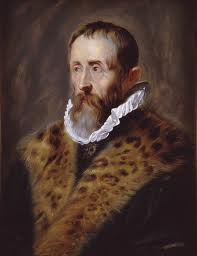 Justus Lipsius was born in the Southern Netherlands (nowadays Belgium). After his studies at Köln and Leuven he went to Rome with cardinal Antoine De Granvelle, as his secretary.
From 1512-1574 he was appointed professor at the Jena University and from 1518-1591 at the Leyden University.
In 1595, after his reconciliation with the Roman Catolic Church, he became professor in history and latin at the Leuven University.
Subjects, which aroused his great interests, were classical antiquity, literature, philosophy and technical science.
More than 4.000 letters and publications by his hand are kept, one of them “De militaria Romana” (1595).